Among Japanese watchmaking giant Seiko Group’s vast array of watch lines, perhaps none is as odd as Galante. This brand, limited to Japan and Taiwan for the most part, is everything Credor and Grand Seiko is not. Galante is a high-end brand with a modern, avant garde look that expresses a different face of Japan. And the watches, while all similar in construction, are radically different in design.

The basis of the Galante brand is sex. The company makes no effort to hide this face, playing up the sexual implications of the words, “sports” and “gallant” in marketing materials. The idea was that boldness, adventurousness, and individuality are what makes someone attractive to the opposite sex. And that sex is a game played by both partners. So Galante watches were offered for both men and women.

Despite the racy marketing and somewhat misogynist (if oddly-worded) advertising copy, Galante has always been a brand that catered to both genders. Indeed, the majority of Galante models are clearly intended for women. And there are no paired/couples watches offered, as was typical for Seiko’s Credor, Grand Seiko, and other lines. This is an individual watch.

From the beginning, back in 2005, Galante marketing was a novel turn for grand old Seiko. The product was launched with celebrity endorsements, expressing “why they chose Galante” and celebrating pursuits that were anything but corporate standard. These endorsements came even before the watches, in fact. And Galante marketing remained focused on their stories as much as on the unusual design elements for the first decade.

The first raft of Galante models all shared one of two large cases measuring 43 or 45 mm across and 15.1 or 16.6 mm thick. All used the new Seiko automatic Spring Drive movements, Cal. 5R65 with time and power reserve or Cal. 5R66 adding an inner non-adjustable 24 hour hand. Interestingly, the GMT models are narrower but thicker while the time-only versions have a rotating bezel with 15 minute markings. All feature an unsightly hour window where the 4:00 marker should be on the dial, and this balances but doesn’t exactly match the power reserve meter from 7:00 to 8:00.

The Galante case is highly unusual. The most distinctive element are the four cylindrical columns on either side of the strap. They are topped by toothed decorative elements and “cut into” the middle section of the case. Almost every Galante model features these four columns, apart from the FC Barcelona limited edition of 2013.

The columns are screwed onto a back plate and serve to hold the middle section in place on models with a fixed bezel. The columns are free-standing for models with a rotating bezel, with the middle of the case screwed separately to the plate. All of these elements can be removed for service and finishing. This novel construction continued on every Galante model to date.

The dials feature large, intermittent markers and most have a unique curved seconds hand. They are finished to a high degree, with polished and applied elements adding depth and interest. Many later Galante models featured artistic dials with laquer painting.

All Galante models used were equipped with Seiko’s Spring Drive movement from launch until 2009. This was the company’s most accurate and high-tech movement at the time, and its use here demonstrated the positioning of Galante at the top of the range for the company. The Spring Drive movements used, Cal. 5R65, 5R66, and 5R86, are quite similar to the 7R (Credor) and 9R (Grand Seiko) movements. Indeed, apart from finishing they are identical.

On early models, the rotor was darkened and plain. Seiko claimed that these evoked European theatrical masks. Later Galante movements feature a guilloche pattern on the plates and bridges and deep, dark Tokyo stripes on the rotor.

Interestingly, Seiko named each model sequentially from the start. Design 01 was the pink gold model, for example, while Design 06 was the new mixed-material bezel. But the limited-edition SBLA019 was not given a “Design” name, being referred to merely as “Limited” in the catalog. This trend would continue for future models.

2007 saw an entirely new “Concept” for Galante: The Spring Drive chronograph. Powered by Cal. 5R86, the chronograph remained relatively faithful to the original design, with four pillars holding the case to the back plate. The pushers, at 2:00 and 4:00, are industrial chic, with a wide face drilled with 8 holes around the circumference. Flanges on the inner side give it the look of a municipal water pipe. The crown features sharp angled teeth that “bite” when winding or setting the movement. The case is a larger version of the GMT, measuring 44.4 mm diameter and a whopping 18.8 mm thick.

The subdial layout for this Spring Drive movement is novel: A 30 minute counter is stacked above a 12 hour register on one side of the dial at roughly 1:30 and 4:30, with the date nestled in between at 3:00. Small seconds are plated at 9:00, with the power reserve pointer below around 7:00.

Three chronograph models were offered starting in June of 2007: The limited-edition SBLA024 has a rose gold bezel and case combined with bright titanium pillars and back plate. Just 30 were produced, priced at 2,625,000 Yen (almost US$22,000 in 2007). Two regular production models were also produced, both in stainless steel and priced at 840,000 Yen (about US$7,000 at the time). SBLA025 echoes the black and white with Roman numerals look of SBLA005. SBLA027 has Arabic numerals from 6 to 12 like the limited-edition model, and a “port wine” color scheme.

Another special edition chronograph was released later in 2007. SBLA029 commemorated the 100th anniversary of the jewelry store in Takayama which serves as the Seiko Master Store. It is unclear what the original retail price was or how many were produced.

In 2008, all of the existing Galante models were revised and renamed, with prices increased as well.

The existing model range, SBLA002-SBLA020, became SBLA030-SBLA039 and the limited edition SBLA019 was removed from the catalog. Many of these would continue as staples of the Galante line for many years, however. Notable is the black and white “Design 03”, one of the original models which remains in production as of 2019.

The only really new watch introduced in 2008 was “Design 09”, a yellow gold chronograph model. SBLA044 is decidedly feminine, with a white “butterfly” dial with light blue background to the chronograph registers and a white leather strap. It launched at MSRP 2,625,000 Yen (about US$26,000).

Two additional limited-edition watches were released in 2008 as well. Just 32 examples of each of SBLA041 and SBLA043 were released. These were priced at 1,680,000 Yen (about US$15,000) and appear to have sold quickly since they were never even listed on the Galante web site.

In 2009, Seiko released the second batch of Galante Spring Drive watches, all of which remain in production today. Design 10, SBLA047, was launched in March and is a revised version of the original SBLA003/SBLA033 with a new grooved middle case. The old model was retired at the same time. A new chronograph model was introduced at the same time. Design 11, SBLA049, had a similar look to the limited-edition SBLA029 from 2007, and remains in production today.

Design 12 (SBLA051) and Design 13 (SBLA053) appeared in June 2009 and introduced a new larger case for the GMT model. These 5R66 models have the rotating bezel previously only found on the old non-GMT models and use a full-length GMT Hand instead of the short hand used on previous models. These were the first Galante models on a metal bracelet, and introduced a new dial design with bold “icicle” markers at 3, 6, 9, and 12.

These would be the last Galante models with a sequential “Design” name. All future models received conceptual names and model numbers only.

This larger case and icicle dial was also used for three limited-edition models, SBLA055, SBLA 059, and SBLA061. These featured different bezels but kept the main case body and bracelet.

SBLA055, with just 3 produced, was paved with diamonds and came at the eye-popping price of 10,500,000 Yen (nearly US$100,000). This would be the most expensive Galante model ever made, and indeed is one of the most expensive Seiko models ever. It has 252 diamonds on the dial plus 81 more on the bezel. The four directions are indicated with a black diamond (“Genbu“), sapphire (“Seiryu“), ruby (“Suzaku“), and white diamond (“Byakko“). The crown is set with a half-carat diamond as well.

Much more accessible was the 5th anniversary model, SBLA059, with a carved bezel. Still, just 30 were produced.

In March 2011, the same design was reused for another limited-edition piece, SBLA061. This reversed the black and white on the dial but is otherwise similar.

SBLA063, issued in April 2011, was nearly identical to SBLA059. Created exclusively for the Tokushima Boutique, SBLA061 has “Awa no Kabukimono” (“What’s that thing?”) inscribed on the reverse.

Another special edition in 2009 was the chronograph SBLA057, produced for the 77th anniversary of the Tomiya jewelry store. It is similar again to SBLA049 and SBLA029 before it but shipped on a denim strap.

After these models, Seiko turned their attention to the new mechanical SBLL models, with no more Spring Drive watches launched until 2011. The company’s marketing shifted as well, from Japanese celebrities to more generic imagery.

All images taken from Seiko’s Galante web site and promotional materials, except the SBLA029 and SBLA063 images, taken from online auctions. 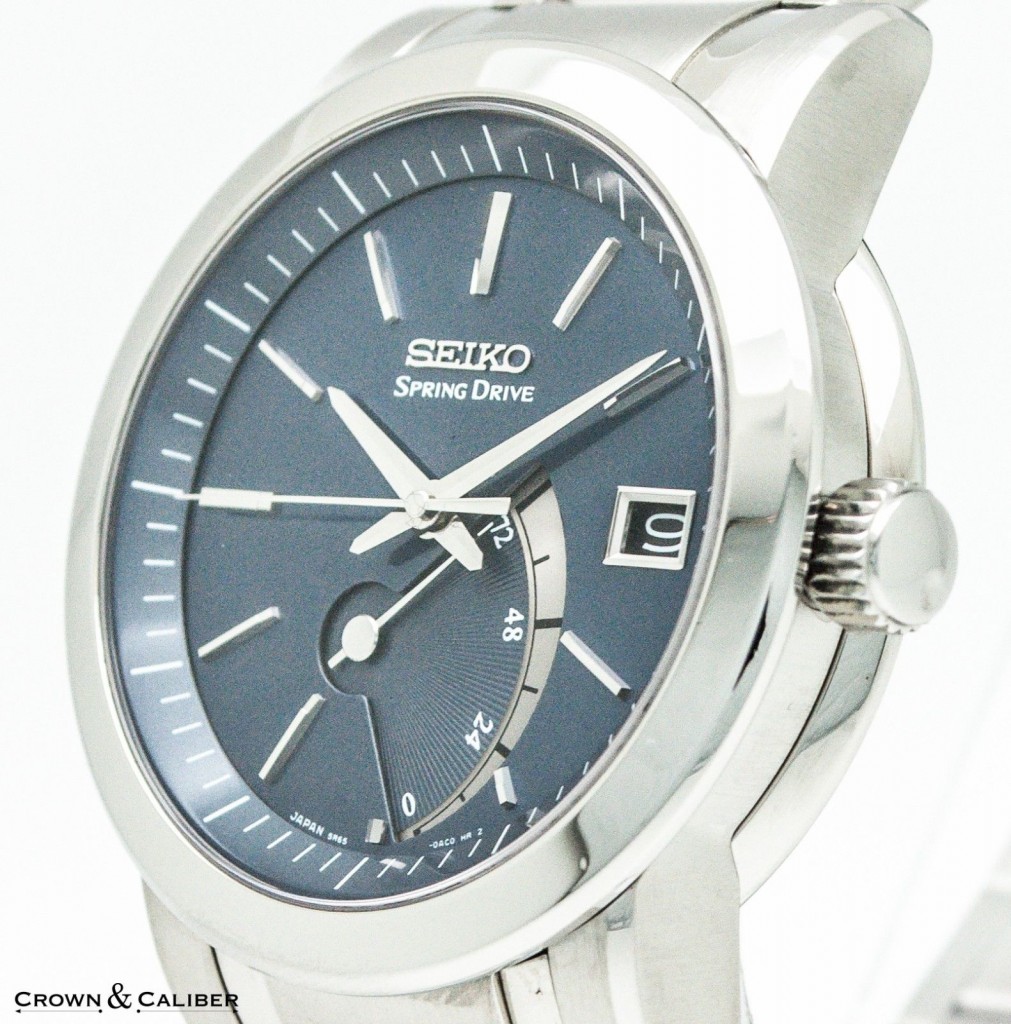