I’ve recently written about the odd but surprisingly frequent practice of casing two movements into a single watch. From Nappey to Ardath to respected brands like Hermes and Cartier, many companies have used twin movements in a single watch. But what about squeezing in three, four, or more movements? The development of compact and inexpensive quartz movements made that possible in the 1980s, and this has lead to the creation of many novel oddballs.

Designer Luigi Colani teamed up with Müller & Co. of Oberdorf, Switzerland to create a line of novel watches in the 1980s and 1990s. The Colani brand deserves some respect for unique designs that are quite tasteful for the time. The simple Colani Beta 1 (pictured at right) incorporates some interesting touches, like the crown and day/date windows at 4:00 and the trident seconds hand which was a signature of the brand. But it is another watch that brings us to look at Colani today.

The Colani Apogee first appeared in 1986 and included four independent quartz movements driving no less than 14 hands on a single dial. Despite packing in 3 date windows, 2 day windows, and a world time pointer, the dial is surprisingly harmonious. And despite Colani’s reputation for flowing, organic forms, the Colani watches are surprisingly angular. It’s not entirely clear what function all of the six crowns perform, though it is likely that the crowns at 12, 4, and 8 at least are functional since they line up with the subdials. The Müller & Co. watches do not appear to have lasted much into the 1990s.

I’ve written about Le Phare’s Jean d’Eve brand previously, but this time we’re focusing on an even rarer model for the already-overlooked brand. The Airport Line appeared at the Basel Fair in 1987 alongside the updated Sectora retrograde ladies model.

Unlike the odd but sleek Sectora, the Airport Line is as ungainly as its name. The octagonal case manages to be slab-sided despite the sculpted central lug. Each corner has a separate independent movement with hour and minute hands to show local time in various locations around the world. The central hour and minute hands are “home time” and are operated using a crown at 3:00.

Jean d’Eve also produced a “Golden Race” model with 12 crown-like protrusions that somewhat resembled the Airport Line. And the central lug design would reappear in much more harmonious form in the groundbreaking Samara automatic quartz model the following year. It is unclear if Jean d’Eve produced many examples of the clunky Airport Line or how long it remained in production.

Raymond Weil began making watches in Geneva in 1976 and gained a reputation as a quality independent watchmaker in the 1980s. In 1989, the brand introduced its own triple-movement watch, one of the most harmonious and forward-looking designs. Likely named for the Trianon Palace in Versailles, the name also reflects the triple-movement design.

The Trianon features two small dials operated by crowns at 4:30 and 7:30 for various world time locations. The main dial is offset toward 12, with a small seconds subdial dead center of the dial. It is operated by a crown at 2:00, the only slightly-unbalanced element of the design.

Raymond Weil offered the Trianon with a white dial and grey subdials (for an upside-down panda look) or a blue dial with white subdials. It remained in the catalog at least through 1991 but is virtually unheard-of today. Even though offered by a well-known brand, I could not find an example anywhere on the internet today.

Delaneau is a French jewelry company founded in 1880. Originally called “Delano” and later written “DeLaneau”, the company produced a few thousand watches per year in the 1990s, with prices ranging up to $400,000 thanks to precious metals and diamonds. In the 2000s, the company made a run for the top of the watch and jewelry market market, and always produced interesting and creative models.

In 1992, Delaneau introduced the Three Time Zones watch, with a pair of tiny quartz dials placed between the lugs. This was a high-end watch, with a diamond pave bezel surrounding all three dials and even encrusting the entire watch in some cases.

The Three Time Zones model remained in production for over a decade in various forms, including the remarkably clean version pictured at right, which used an automatic chronograph movement (likely the ETA 2894-2) along with the twin quartz movements. These watches are seen relatively frequently, and often sell for far less than the original price despite the expensive materials. DeLaneau seems to have fallen on hard times in recent years and was acquired by Monaco-based Luna Management in 2017.

One of the most notable triple-movement watches appeared in 2002. Glycine introduced the original Airman model in 1953, sporting a 24-hour Felsa 692 movement. Since then, Glycine created a variety of GMT watches under the Airman brand, but the triple-movement Airman 7 stands alone.

The Glycine Airman 7 measured a massive 53 mm in diameter, and included no less than three automatic ETA movements. The small “Time at 1st” and “Time at 2nd” dials use ETA’s compact 2671 movement with two hands, while the large dial at 3:00 uses the complicated ETA 2893-2 with GMT hand. With eight hands, the Airman 7 is not the most complicated multi-movement watch, but the design has an attractive dashboard look. And the 24 hour hand of the main movement recalls the original.

The Airman 7 remained in production for a decade before being replaced by an integrated model with a single movement. The company also produced a left-handed version of the triple-movement watch, along with the square-cased Plaza Mayor model.

French fashion brand Façonnable was used on a line of inexpensive watches in the 1970s before moving upmarket in the 1990s. In 2004, the company produced their own triple-movement watch in the Hydra line. The design seems inspired by the Delaneau Three Time Zones, with small movements at 6 and 12 between the lugs, though it is different enough to be unique. It’s not exactly attractive, though.

The award for most independent movements in a watch goes to one that’s still available today. Armenian-American brand IceLink produces “LA-inspired” watches in Switzerland with surprisingly affordable prices. In 2007, the company introduced their signature 6Timezone model, which includes no less than 6 independent watch movements in a single massive case. The 6Timezone includes labels for various world cities, including Yerevan Armenia in the top-right.

Later versions of the 6Timezone confusingly include just 4 movements, with non-functional crowns and dials in the lower left and left positions. Various models use ETA 280 quartz and Miyota automatic movements. Today’s 6TZ models have just four movements, while the Presidential has six.

With complications in demand, packing multiple movements into a single case is something of a cheat. This explains why respected brands like Raymond Weil and Glycine have switched to complicated integrated movements and modules instead of multi-movement designs. Although a few watches still use two movements, using more has always been a gimmick. And, looking at the watches above, it’s easy to see how gimmicky most of these watches turn out. Still, as a dual-time watch enthusiast, I’m impressed by the Trianon and Airman 7.

Eugène Meylan, Glycine, and the Fight Over the First Automatic Watch 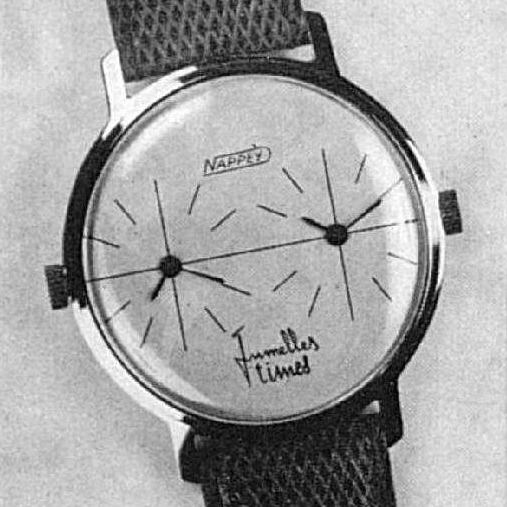