The Jaeger-LeCoultre Memovox is a true classic: A novel watch that sold well when it first appeared and lasted for decades after, continuing even today. Although not the first alarm wristwatch, the Memovox came on the market in 1951 and became the first ever automatic watch with an alarm function in 1956. Jaeger-LeCoultre upped the ante with a high-beat version in the 1960’s and 1970’s, and has continued offering this useful complication in today’s Master Memovox and related models.

This isn’t as easy as it sounds, since the alarm function hammers on the case back and a free-swinging winding rotor would interfere with it! Jaeger-LeCoultre’s 1950’s and 1960’s Memovox automatic calibres got around the issue by using “bumper” movements – the winding rotor only swing part-way around the circumference of the watch. This was addressed in the 1970’s by creating a rotor with a wide hole in the middle, allowing a protuberance from the case back to pass through the free-swinging rotor. Today, Jaeger-LeCoultre uses special sapphire hammers that hit the side of the case on their repetition watches but the current Master Memovox’s Calibre 956 still uses the hole-in-the-middle approach.

Browsing over the April 28 Auctionata/Chrono24 auction, we spotted no less than three Jaeger-LeCoultre Memovox watches listed for sale. Perhaps we can talk about the Memovox while comparing these three classic watches! As an added bonus, all three are listed at the same starting price of € 900, and we disagree with Auctionata’s pricing (of course!)

First up is this basic Jaeger-LeCoultre Memovox, dating from about 1960. It’s typical of the later, larger Memovox models with a gold plated stainless steel 37 mm case and shows moderate wear. The dial is a bit dotted and stained, but we wouldn’t try to fix it and would instead wear it with pride.

This watch features Jaeger-LeCoultre’s Calibre 825, which is similar to the original automatic Memovox Calibre 815 but with the addition of a date module. These are well-respected movements (Jaeger-LeCoultre calls them “legendary“) and if kept clean and serviced will last for decades.

Next up is a gold Memovox with a cruddy-looking gold dial. Auctionata calls this “LeCoultre Memovox Wristwatch, Switzerland, Around 1960“, but let’s dig a bit deeper. First off, we have that name. Rather than “Jaeger-LeCoultre”, this is just “LeCoultre”, suggesting it was an American-market watch. Jaeger-LeCoultre were unable to use their full name in the USA until 1980 due to a trademark settlement, so our watches get a shorter name.

Looking closely, we notice that the alarm disc bears an “HPG” logo. This was another American-market addition, signifying a “High Precision Guarantee” from LeCoultre and suggesting it isn’t from 1960 after all. Rather, it is likely that this is a 1969-1980 model with the “Speedbeat” Calibre 916, which HPG signified in the American market. This was a 28,800 A/h movement and did indeed perform better than earlier Memovox models.

It’s a shame Auctionata gives the wrong year for this watch, but this is very common in their listings. Regardless, this is another wearable watch but we would deduct some money for the garish gold look before adding some back in for the Speedbeat movement!

Finally, we have this stainless steel option, listed as “Jaeger LeCoultre Speed Beat Wristwatch, Switzerland, C. 1975“. This time, we’ll believe their date estimate since it matches up nicely with the design and movement. And thankfully, there’s a photo of the movement included in the listing, another thing we wish Auctionata would always do!

Look closely and you can see just how wide the hole in the center is – that’s where the hammer hits the “gong” protrusion! Too bad the hammer isn’t visible here, but then again no Memovox has an exhibition case back until the manual-winding Calibre 914 of 1994.

This stainless watch is in good shape and the clean design and silver color make it much more wearable than the gold on gold offering above! If we were bidding, we’d pick this one.

So we have three Jaeger-LeCoultre Memovox models differing in case coloring and movement, but all in an eminently wearable 37 mm size. How much will they sell for? Here are our estimates: 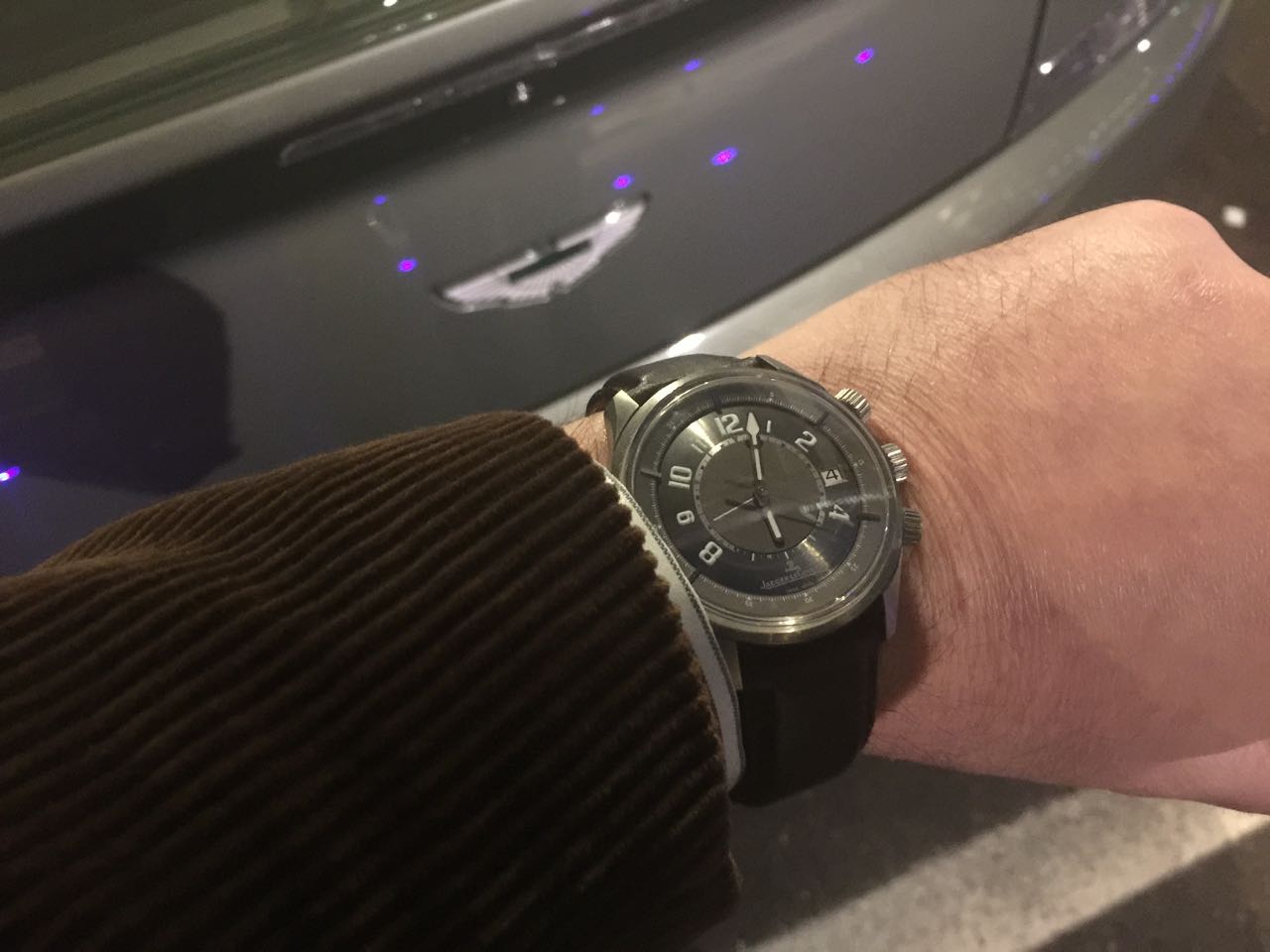