Mastodon
Home » Ringing In 2022 With a Look at Horological History

It’s traditional to celebrate important anniversaries and to use the New Years season to look back. That’s what we’re doing today, with a look at some important events in horology from 1822, 1872, 1922, 1947, 1972, and 1997! From Edmond Jaeger and Bovet to the Audemars Piguet Royal Oak and a whole lotta quartz, a little bit of a grab bag here, and we hope you enjoy it!

Édouard Bovet was born in Fleurier, a small town in the Val-de-Travers in Neuchâtel. With two brothers, Bovet moved to London to practice his trade, likely due to the Restoration and Regeneration of Switzerland. There, Bovet secured a job at the firm of Magniac and was soon sent to work in Canton in China. The only open city in China at that time, Canton allowed Bovet to flourish as a seller of watches as well.

200 years ago, on May 1, 1822, Bovet incorporated his own watch business in London to supply fine watches to China. The company formed a triangle, headquartered in London but with production in Fleurier remaining in the hands of his father and another brother. Bovet was a brilliant marketer, encouraging the rich traders in China to purchase two watches (in case one failed) and to be buried with their best watch. The “dead beat” movement was a specialty for Bovet, and many featured display casebacks!

Soon, the name of Bovet became synonymous with high-end watches in China, with many simply referring to them as “Bowets.” Édouard returned to Switzerland in 1830 but soon left again due to political conflicts, moving production to Besançon across the border. The firm was re-established in 1840 as Bovet Frères, though Canton lost its special status after the Opium War. Bovet struggled in the 20th century until it was acquired in 1989 by Michel Parmigiani and re-established by Roger Guye and Thierry Ouelevay in 1994. Under Pascal Raffy since 2001, Bovet 1822 has seen some success in the high-end market and is part of the resurgence of watchmaking in Fleurier.

1872: Standard Time and the Railroad Watch

150 years ago, in 1872, Charles F. Dowd proposed the creation of four standard timezones across North America. He based these on Greenwich Mean Time, which served as “railroad time” for Great Britain since 1847. This proposal was a modification of Dowd’s 1870 suggestion, and was important in that it would effectively create standard one-hour time zones all around the world. Although blocked by the railroads at first, it was adopted by most in 1883.

The necessity of Standard Time and a reliable railroad watch became obvious after a tragic head-on collision in April, 1891 near Cleveland, Ohio. A local jeweler, Webster Ball, recommended the creation of a standard railroad watch and made it his life’s work to provide these. Today’s Ball Watch Company is named in his honor, and the rough time zone concept established by Dowd form our global time system.

Edmond Jaeger was a brilliant inventor and namesake of today’s watchmaking firm, Jaeger-LeCoultre. He was born in 1858 in Alsace and soon moved to Paris to become a watchmaker in the 1880s. Among his inventions was an ultra-thin movement that would form the basis of the Jaeger-LeCoultre relationship. In 1903, Jaeger requested that Swiss firms capable of producing his slim movement make themselves known, and Jacques-David LeCoultre, scion of LeCoultre & Cie., responded. Jaeger soon found himself on the board of administration of LeCoultre thanks to a lucrative contract to supply Cartier with movements produced in Le Sentier.

In 1921, Edmond Jaeger was suddenly forced to withdraw from his businesses due to an illness, and he died 100 years ago in 1922. After his death, Jacques-David LeCoultre took effective control of Jaeger’s Swiss watch distribution company and in 1937 it was merged with LeCoultre’s Specialties Horlogères to become Jaeger-LeCoultre. But this firm also distributed Vacheron Constantin, and Jaeger’s Paris firm remained in operation, a complex arrangement that took decades to resolve.

1947: The Vulcain Cricket is Introduced

Although many dreamed of creating an alarm wristwatch, it would not come to fruition until 75 years ago, when Vulcain introduced the Cricket. The impact of this watch from the little Le Locle firm is obvious in the archives of Europa Star, where it was featured frequently from its 1947 announcement through the 1960s. The image here shows the first photo of the new “Vulcain-Cricket”, in the Portuguese-language imprint Belora in 1948.

The Cricket produced a buzzing sound using an inner membrane, and this reportedly gave the watch its name. It was popular with many business people, and was reportedly the watch of choice for many US Presidents, including Harry Truman, Dwight D. Eisenhower, Lyndon B. Johnson and Richard Nixon. This association gives the Cricket a notable distinction as being the other “president’s watch” along with the famous Rolex Day-Date!

One more interesting fact about the Cricket is that, being a “complicated” watch, it was not subject to the harsh Swiss production and export controls then in place. This allowed Vulcain to grow unimpeded through the 1950s, unlike many competitors. But the company was merged with Revue, Buser, and Phenix into MSR in 1961 and retired in favor of “MSR” and “Revue Thommen” in the 1970s. Vulcain was re-launched in 2001, with a new Cricket the primary product.

Unlike the previous anniversaries, which were fairly quiet, everything changed in 1972. Topping the news was the launch of the Audemars Piguet Royal Oak, certainly one of the most famous watches in the world. But 1972 also saw the introduction of the Omega Time Computer, Bulova’s Accuquartz, and the first electronic chronograph, Mosaba “Swissonic 100” Cal. 9210. Then there were more technical firsts: 1972 saw the first LCD digital watches, the first watch movement made of synthetic materials, the first digital solar watch, and the first watch electronic timer. Still not enough? How about the first quartz movement small enough for a ladies watch or the first modern mass-produced quartz movement, Seiko’s Cal. 38!

It was a busy year.

1997 was a busy year as well, but it was nothing compared to the cascade of corporate mergers two years later. Still, 25 years ago saw the introduction of the A. Lange & Söhne Langematik, their first self-winding watch, Blancpain brought the Fifty Fathoms back to the lineup (looking very much like a Rolex Yacht-Master), Mont Blanc began producing watches (and were not yet called Montblanc), Sinn launched the EZM, the public got its first look at Urwerk, and Seiko announced the Spring Drive (though it did not go on sale until a few years later).

On the business side, Stephen Urquhart, half of the “dynamic duo” behind Audemars Piguet’s resurgence jumped to Swatch Group and Omega. Panerai was purchased by Vendôme Luxury Group, which later merged with Richemont, setting the stage for the mergers mentioned above. Newly independent Gucci acquired Severin Wunderman watch manufacture, renaming it Gucci Timepieces. Finally, Kelek merged with Breitling, bolstering the company’s in-house manufacturing and design capabilities.

It seems trite to say “this was the year everything changed” but that definitely rings true of 1972, 50 years ago. And yet, who’s to say whether the Royal Oak was more important than the Cricket or the sudden death of Edmond Jaeger? One thing is certain: We will see commemorations of many of these anniversaries in 2022, with a new Audemars Piguet Royal Oak eagerly expected. Here’s to another year of watches! 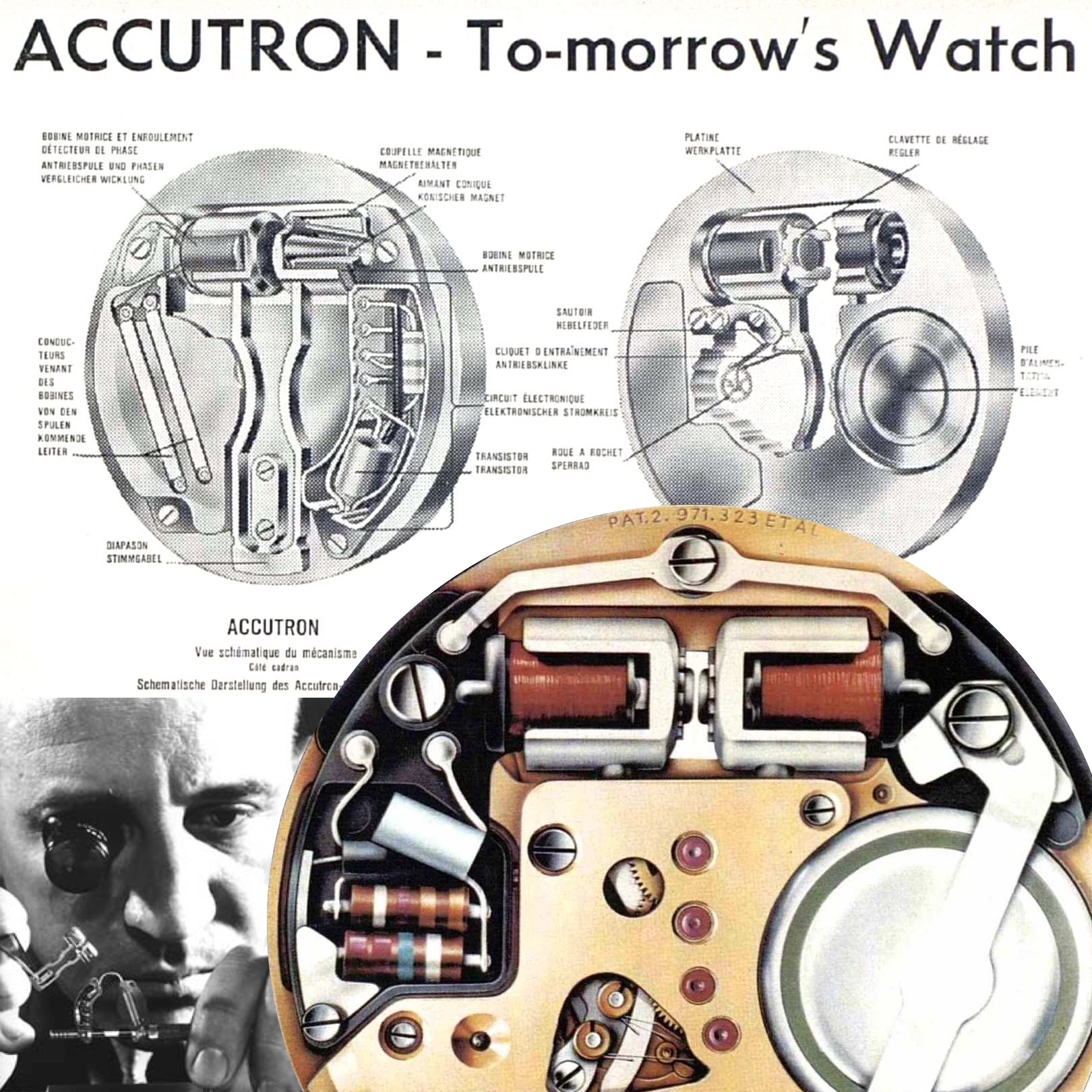